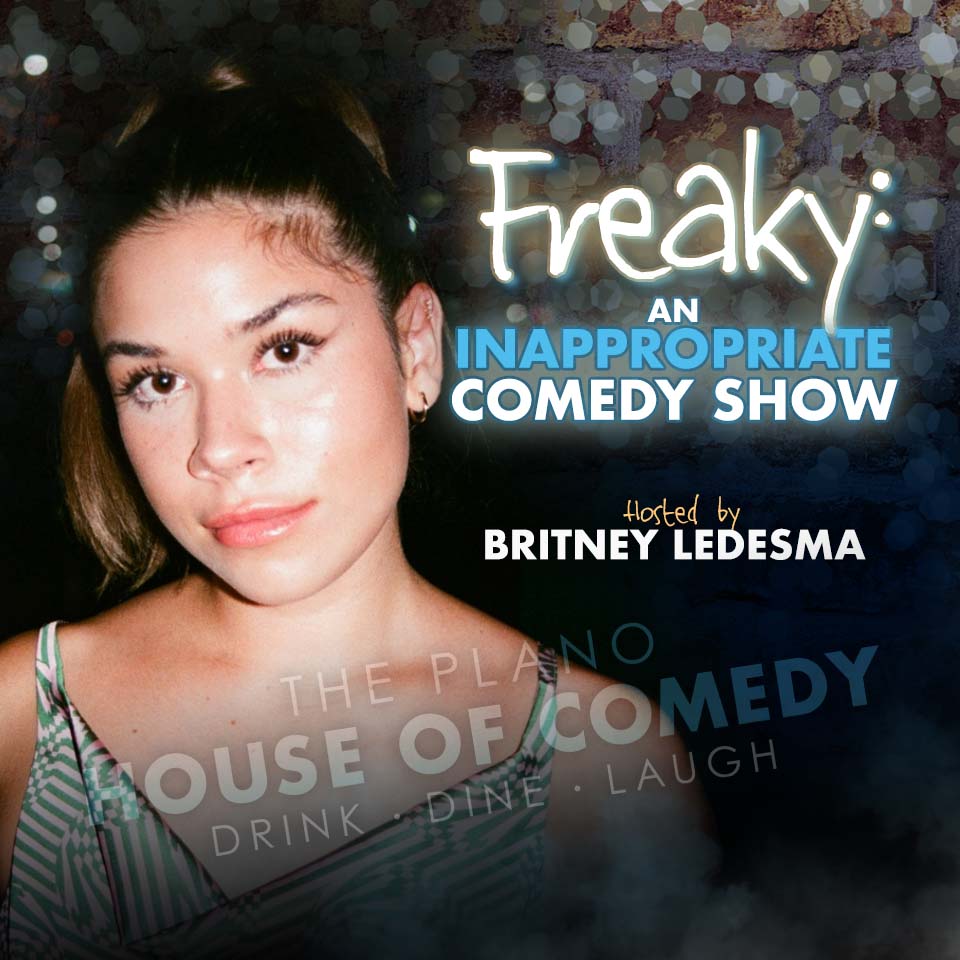 FREAKY: AN INAPPROPRIATE COMEDY SHOW is a showcase that features the best up and coming comedians from around the country whose style is as irreverent as it is INAPPROPRIATE. It’s gonna get dark, dirty, and a little deadpan. Will there be d*ck jokes? Most definitely. Will we see you there? We don’t know, but we sure hope so. Don’t waste your Sunday wishing you could’ve been here!

Britney Ledesma is a dark witted stand up comedian based in Austin, Texas. Within 3 years of starting stand up she's opened for Steven Byrnes, Russell Peters and featured on Brian Redban’s Secret Show. While gaining prominence at all the local Texas Clubs, Britney has also performed at clubs all across the country such as: The Comedy Store, The Stand, and New York Comedy Club. Britney also touts a content filled social media and YouTube channel by hosting her podcast and vlog titled “Just Okay”. Wherever you find Britney being creative, you’re guaranteed to have a laugh.

Dylan Sullivan is a comic who can be seen on Comedy Central's Lights Out with David Spade, The Comedy Store documentary on Showtime, and was a former "door guy" at The Comedy Store in Los Angeles.

Since moving back to his home state of Texas, Dylan has appeared on the 2022 Moontower Comedy Festival, SXSW, and regularly showcases in Austin and throughout the country.

A true storyteller whose dark, dry wit has captivated crowds of all sizes. Chris Tellez has been featured on Comedy Central, and has been seen on stages like The Oddball Comedy Festival, Comedy Central’s Colossal Clusterfest and The Moontower Comedy Festival. You can also catch him as the co-host of the “Why Should we care?” podcast!

Chris has worked with some of the best in the game including Nate Bargatze, Nick Thune, and Big Jay Oakerson to name a few.

Following her start in Houston, Texas, upcoming comedian Dulce Mac is now in Austin, Texas. Doing shows all over the city, and going back to her home town from time to time to perform at her favorite comedy club and place in the world, The Secret Group. Dulce started in the podcast world, first appearing in David Lucas and William Montgomery’s podcast “Brothers in Cursive”. She produces her own podcast with her comedy partner, Grace Kirk called “Yeah Yeah Podcast”. She brings chillness to the stage with her soft, deadpan like voice but never fails to hype up the crowd.

Phillip Garcia is a comedian originally from Fort Worth that started his comedy career in Houston. When he’s not being kicked out of various locations that require shoes and a shirt he spends time making broadly painted observations for your entertainment. Starting standup comedy in 2016 and having 3 prior years of improv study, he hit the ground running in the DFW comedy scene and has quickly risen to popularity all over Texas. He’s shared the stage with Ron White, Tim Dillon, and Brian Redban as well as performed at Texas comedy clubs such as Hyenas, Improv, The Secret Group, and other independent shows all around the southwest.
Back to Calendar